Abstract
Objectives: Adipogenesis is the process by which pre-adipocytes are differentiated into adipocytes. It also plays an important role in adipocyte formation and lipid accumulation. () extracts are used for the treatment of various diseases such as hepatitis, jaundice, and tuberous lymphadenitis in oriental medicine. However, its effect on adipogenesis has not yet been studied. In this study, we investigated the effects of on adipogenesis in 3T3-L1 cells.
Methods: Cells were treated with 50, 100, and 200 µg/ml of and cell viability was evaluated. To differentiate the 3T3-L1 preadipocytes, a 3-isobutyl-1-methylxanthine, dexamethasone, and insulin (MDI) solution were used. The accumulation of lipid droplets was determined by Oil Red O staining. The expression levels of adipogenesis-related proteins were also determined.
Results: MDI solution differentiated the preadipocytes into adipocytes and accumulation of lipids was observed in the differentiated 3T3-L1 cells. Interestingly, the amount of lipid droplets was reduced after treatment. In addition, the expression levels of key adipogenic transcription factors, such as CCAAT/enhancer-binding proteins-α (C/EBP-α) and peroxisome proliferator-activated receptors-γ (PPAR-γ) were also reduced after treatment. Furthermore, increased AMP-activated kinase (AMPK) phosphorylation and decreased sterol regulatory element-binding protein-1 expression.
Conclusions: Our results showed that reduced preadipocyte differentiation by inhibiting C/EBP-α and PPAR-γ levels via the AMPK pathway. Therefore, we suggest that may be potentially used as an anti-adipogenic agent.
Keywords : 3T3-L1 cells, Adipogenesis, CCAAT/enhancer-binding proteins-α, PPAR gramma, AMP-activated protein kinases,

Obesity is a state of excessive accumulation of adipocyte during adipogenesis1,2). The obese population is rapidly increasing worldwide due to the irregular diet and unhealthy lifestyle of individuals3,4). In addition, obesity is a major health problem and a risk factor for increasing the incidence of various human chronic diseases, such as hyperlipidemia, type 2 diabetes, heart disease, and cancer5-8). Several drugs have been developed to prevent and treat these obesity diseases. However, these drugs exert serious side effects, such as depression, gastrointestinal tract problems, and cardiovascular diseases9). Therefore, it is necessary to develop antiobesity products using natural extracts that possess good properties.

Excessive adipogenesis is a major cause of obesity. Adipogenesis is the process by which adipocytes develop and accumulate in the adipose tissue at various sites in the human body10). Adipocytes are formed by the proliferation and differentiation of preadipocytes into morphologically or biochemically mature adipocytes, which require the activation of important transcription factors. stimulation by hormones, including insulin, and regulation of adipocyte gene expression11). Therefore, the activity of transcription factors associated with the gene regulation of preadipocytes is also important for the regulation of obesity.

Linn. (R. sceleratus, 石龍芮) is an annual or perennial herbaceous plant often found in riversides, ditches, and slow streams12). This species, the family, originated in the northern hemisphere and is distributed throughout the world2,13). component include ranunculin, protoanemoninand anemonin13). Although the plant contains a toxic substance, protoanemonin, in the juice of its stems and leaves, it can be removed by heating or drying2). Anemonin is a known antipyretic, which along with protoanemonin, plays a major role in the sedating effect of this species14). This genus is unique, involving both its toxicological and pharmacological properties. In traditional medicine, was used to treatment of various diseases, such as diabetes, arthritis, neuralgia, malaria, hepatitis, and jaundice12,15,16). All parts of the plant are poisonous when fresh, but the toxins are destroyed when the plant is heated or dried2). The heated or dried plant can be used to treat cancer of the esophagus and the breast13). Moreover, exerts an anti-inflammatory effect. have been reported to be effective in local anti-inflammatory in acute inflammatory models by inhibiting cyclooxygenase-1 and 12-lipoxygenas activity2). have had many pharmacological effects, but the effect of on adipogenesis has not yet been studied. Therefore, we examined whether affect adipogenesis.

In this study, we investigated the effect of the extracts on lipid accumulation in 3T3-L1 preadipocytes.

extract was obtained from the Nakdoggang National Institute (Freshwater Bioresources Culture Collection, Sangju, Korea). was collected from Sangju, Gyeongsangbuk-do in 2017. The whole plant was hot air-dried at 60°C for 72 hours and ground. Samples are extracted twice using 70% ethanol (4023-4110; Daejung, Siheung, Korea) to 20 times of sample weight at room temperature. After extraction, it was filtered using ADVANTEC No. 2 filter paper and then concentrated under reduced pressure (N-1100S, Rotary Evaporator Vertical; EYELA, Tokyo, Japan). 20 mg of the prepared extract was dissolved in 1 ml of dimethyl sulfoxide (Sigma Aldrich Co., Ltd., St. Louis, MO, USA) to prepare a concentration of 20 mg/ml.

The 3T3-L1 pre-adipocytes were distributed in a 6-well plate at a density of 5× cells/well in DMEM supplemented with 10% BCS and 1% P/S at 37℃ in 5%. After incubating until confluency, the 3-isobutyl-1-methylxanthine (IBMX), dexamethasone (DEX), and insulin (MDI) solution containing 1 μM DEX (Sigma Aldrich Co., Ltd.), 0.5 mM IBMX (Sigma Aldrich Co., Ltd.), and 10 μg/ml insulin (Sigma Aldrich Co., Ltd.) was used to induce the differentiation of cells in DMEM with 10% fetal bovine serum (FBS) for two days. After two days of differentiation induction, the medium was replaced with DMEM supplemented with 10% FBS (Gibco) and 10 μg/ml insulin every two days. This was followed by cell differentiation and incubation for 10 d. Every time the medium was changed, the cells were treated at 50, 100, and 200 μg/ml with .

1. Effects of on the cell viability of 3T3-L1 preadipocytes

2. Effect of extracts on the differentiation of 3T3-L1 cells 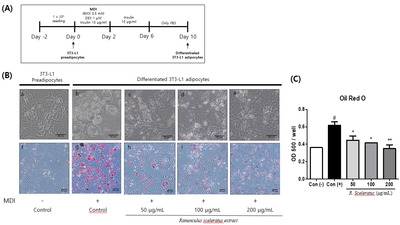 Fig. 2. Effect of extract on the differentiation of 3T3-L1 adipocytes via Oil Red O staining. 3T3-L1 preadipocytes were treated with various concentrations (50~200 μg/ml) of . (A) Cell culture and differentiation protocol. (B) Intercellular lipid droplets were stained with Oil Red O. After 10 days differentiation, representative phasecontrast photomicrographs at 200x and 400x magnification depictied of 3T3-L1 adipocyte. Control (-) include a and b, control (+) include b and g, 50 μg/ml, include c and h, 100 μg/ml include d and i, 200 μg/ml include e and j. (C) Quantification of lipid accumulation by eluting with isopropanol. The Data were presented as mean±standard error of the mean from three independent experiments. Con (-): control without MDI media, Con (+): control with MDI media, MDI: 0.5 mM IBMX, 1 μM DEX, 10 μg/ml insulin, : , IBMX: 3-isobutyl-1-methylxanthine, DEX: dexamethasone, FBS: fetal bovine serum. #P<0.05 compared with the control (-); *P<0.05, **P<0.01 compared with the control (+).

3. Effect of on the regulation of PPARγ and C/EBP-α transcription factors

Fig. 3. Effect of on the expression levels of the C/EBP-α and PPAR-γ in 3T3-L1 cells. 3T3-L1 preadipocytes were treated with various concentrations (50~200 μg/ml) of . GAPDH was used as a loading control. The Data were presented as mean±standard error of the mean from three independent experiments. PPAR-γ: peroxisome proliferator-activated receptor-γ, C/EBP-α: CCAAT/enhancer-binding proteins-α, GAPDH: glyceraldehyde-3-phosphate dehydrogenase, C (-): control (-), C (+): control (+). ##P<0.01 compared with the control (-); **P<0.01 compared with the control (+).

4. Effect of on the regulation of the AMPK/SREBP-1 signaling pathway

Our study aimed to determine the ameliorative effect of the extract on adipogenesis. Initially, we determined the cytotoxicity of in 3T3-L1 preadipocytes. We also examined the effect of via Oil Red O staining of 3T3-L1 preadipocytes. The number of fat droplets decreased in the group treated with compared to that in the control (+) effectively inhibited lipid droplet accumulation.

Additionally, we assessed the AMPK signaling pathway, which regulates the transcription factors. Oxidation of fatty acids, lipid hydrolysis of triglycerides, and adipogenesis by adipocytes regulate the AMPK pathway24-26). AMPK is involved in adipocyte differentiation and adipogenesis regulation, and the activation of AMPK suppresses adipogenesis27,28). Activation of the regulatory pathway requires AMPK phosphorylation which inhibits lipid synthesis and upregulates lipid hydrolysis and fatty acid oxidation26,29,30). Several studies have shown th at AMPK inhibits adipogenesis by inactivating SREBP-1, a transcription factor that regulates lipid homeostasis and metabolism31-34). SREBP-1 induces gene expression associated with the regulation of PPAR-γ transcriptional activity and accumulation of lipids35). SREBP-1 is quickly induced in the early stages of preadipocyte differentiation and plays a role in promoting preadipocyte differentiation along with PPAR-γ. SREBP-1 promotes lipid metabolism by increasing the expression levels of several genes involved in lipid metabolism36,37). These results suggest that AMPK regulates various transcription factors, such as PPAR-γ, C/EBP-α, and SREBP-1, that are responsible for adipocyte differentiation and inhibition of adipogenesis34). Our results showed that significantly increased AMPK phosphorylation and decreased the expression levels of SREBP-1 compared to those in the MDI-induced adipocytes, and that inhibited adipogenesis in 3T3-L1 cells by upregulating AMPK expression (Fig. 5). 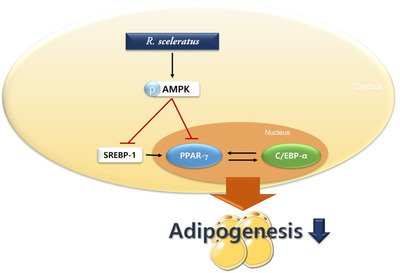 In summary, we demonstrated that inhibits adipogenesis in 3T3-L1 cells by activating the AMPK pathway and suppressing the expression levels of adipogenic transcription factors. Based on these data, this study suggests that the could be used as an alternative therapeutic agent to prevent and ameliorate obesity.

exerts anti-adipogenic effects on differentiating 3T3-L1 preadipocytes. In addition, it downregulates the expression levels of PPAR-γ and C/EBP-α by inhibiting the AMPK/SREBP-1 signaling pathway. These results suggest that can potentially be used as an anti-adipogenic agent.